It ain’t trickin if you got it.
~Lil Wayne

Andy’s right foot came down on another rock, firm and steady, and he skipped forward.  I’d been following his smooth stride for 7 hours, for, quite literally, 70,000 steps.  My goal was simple; match Andy's steps.  Earlier in the day I told him that I’d given myself a lobotomy for the race, that my only plan was to follow his plan.  I’d given up the control and the decision making, given up the pacing duties and all the choices about effort.  Andy said that his goal was to get me back to Bear Mountain in under 9 hours.  His job was to lead.  My job was to follow, keep pace, and be a good companion.

A year ago in the 2015 Bear Mountain 50 miler I’d done none of these things.  I’d gone out that day to race alone.  I’d run recklessly, melted down, and relied on competitors with nothing to offer in return.  Even my recovery in the last few miles, the one thing I could be proud of, was streaked through with shades of self-flagellation.  All through the months that followed a singular thought burned in the undercurrent of my mind; I have serious unfinished business with this race.

In more rational moments that undercurrent would form itself into the loose outline of a plan.  All I wanted was to come back to Bear Mountain and race well.  I didn't care about time or place, I just wanted to put forth an effort that I could be proud of.  That sort of goal is the antithesis of a corporate SMART objective, but it is exactly the kind of goal that can lead to actual success.  It is the kind of goal that focuses on the process over of the outcome, on the controllable variables toward the aspiration instead of the aspiration itself.

As a process, racing well for 50 miles essentially boils down to putting in a hard but conservative effort for the first 40 miles, then running yourself into the ground for the last 10.  The first 40 are about staying sustainably uncomfortable, right at the edge but not quite over it.  The last 10 are about taking every risk your body can absorb, building the pain to an intolerable level, sprinting to the finish, and collapsing.  If you choose to walk during the race, you’ve fallen short.  If you’re able to walk afterward, you’ve left something on the table as well.[i]

And it worked beautifully.  We kept calm and relaxed in the dark through the early rush to Anthony Wayne.  We stayed strong and steady over the broken terrain of the Long Path.  We talked about everything and anything and kept positive and happy.  We held back when others were foolishly aggressive.  We kept pushing when others succumbed to the pain.  On the long descent from Tiorati I saw runners ahead and told Andy “I smell blood”, but he replied “Keep it cool, Jaws.”  After that, as a joke, I sang the Jaws theme every time we approached a competitor – dnn nunt, dnn nunt, dnn nunt dnn nunt DNN NUNT DNN NUNT!  But Andy kept me in check.  By the time we reached the downhill back to Anthony Wayne we were flying, whooping and yelling “DYNAMITE” and “THIS IS AWESOME”.

But now, after 7 hours of running with my friend, the plan was finally breaking down.  Steve joined us at Anthony Wayne for wisdom and guidance and moral support, but for the first time all day Andy slowed.  It was finally time to give in to temptation, to become the hunter, but his steady stride was faltering.  The ultra is a brutal thing.[ii]  I stayed with him for a few minutes.  Then I thanked him for leading me all day, and I told him what an incredible human being he is.  He was the superior athlete, and he’d keep me sane for so long, but now it was time for me to push hard.  Now I wanted blood.

As hoped, the last 10 miles were the easy part, all reckless effort and intense pain but no need for self-control.  To borrow from Lil Wayne, many of the runners in front of me were trickin – they didn’t have it.  I did.  I overtook Nick, then Ryan, then the Shirtless Wonder, then women’s leader Heather Hoescht.  She’d passed us on the road at mile 33, but now she was struggling with the technical descents.  I yelled as I approached “You’re not gonna win this race walking downhill!” ala Dusty Olson.  I’m sure it wasn’t the nicest thing to say, but after she’d finished – and won – she assured me it was exactly what she needed to hear in that moment.  I caught more runners, fought my way over Timp Pass, chased down Pole Guy, and entered the chaos of the overlapping 50K, marathon, and marathon relay courses.  Suddenly there were runners everywhere, going all different directions.  I struggled to keep pace on the uphills, screaming out loud “come on, legs, COME ON, LEGS!” then flew by everyone on the descents.  Downhill running is a skill to be learned, and very few runners have learned it.  I came to the finish line in 8:43:52, a 15 minute 50 mile PR and 45 minutes faster than my previous debacle here.  I walked through the tents to the open grass with my family, then collapsed on the ground, sobbing.  I wasn’t hurt, or sad, or angry, or anything negative – it was just part of the plan.  If you really give everything you have in a race, you’re body and mind will let you have it afterward.  They were letting me have it now.

A few minutes later Andy crossed the line too.  I jumped up and whooped, cheering him across.  We collected ourselves and celebrated the day’s work.  We saw Tim Olson walking through the crowd.  I ran to grab my little guy, our icebreaker for meeting Tim.  Jacob has been in awe of Tim ever since the North Face Curiosity video came out, and he’s fond of telling me things like “I hope Timmy Olson wins and you come in second.”  He told Tim “You’re my favorite runner!” and we chatted and got a picture.  We talked about training through the winter and running on the rocks, then Jacob and Tim exploded some high knuckles.  It was an awesome highlight to an awesome day.

Postscript:  lessons learned
It’s incredibly valuable to run with a friend, particularly when that friend is a strong and consistent runner who’s willing to maintain a pace just faster than you’d be able to sustain on your own.  Andy is exactly that kind of runner for me. Following Andy I was able to turn my mind off and just run, not to mention enjoy the day.  This made me a stronger and faster racer and a much happier runner.

Running Andy’s pace also gave me a wildly unexpected set of data for my evolving understanding of effort and sustainability.  Given my experiences of the last year I’d been planning to run from the start to the second pass through Anthony Wayne with a heart rate target of 140 – 150 (for me that’s roughly zone 2 or MAF to MAF+10).   Following Andy’s pace kept me between 150 and 165 for the first 7 hours.  Even having done that I was able to push hard over the last 100 minutes and chase down quite a few competitors.  I think wisdom would have kept me out of the 160’s, but the data say that 150 – 160 is a reasonable target for an 8 – 10 hour event, which encompasses most 50 mile and 100 K races.  Working backward, I should be able to run the majority of most 50 K races in the high 150’s and low 160’s, much the same target I would use for a marathon.

Of course the early part of a race should be a slightly lower heart rate, since the body isn’t yet fatigued, and the late miles should be at higher heart rate as a finishing kick.  But if we take the data above as a guide for the middle 80% of a race and put it in table form, we get the following:

Any coaches out there, I’d love to get your take on this.  The basis for my personal targets and zone translations are the heart rate data from this race, the 2016 ECSDC 50K, and the 2015 Run Rabbit Run 100 mile (all public on strava), my MAF of 142, and my lactate threshold estimate of 170 based on a Friel-style 30 min time trial. 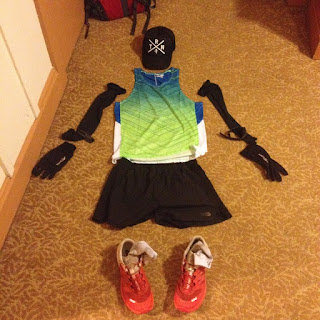 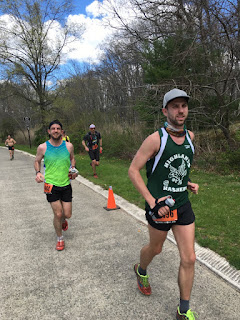 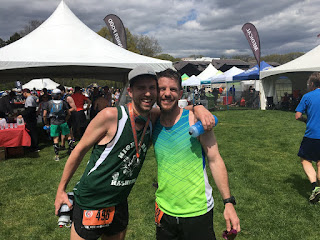 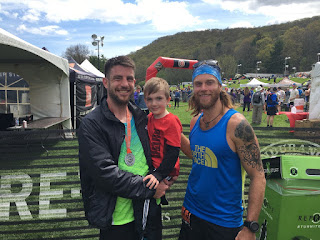 Chillin’ with little man’s favorite runner (All pics thanks to Steven Pack).


[i] By “walk” in this case I mean consciously moving much more slowly than you could.  Trail races routinely present terrain or footing where walking (termed “power hiking” by the ashamed) is the fastest method for traversing the ground.
[ii] One of my favorite phrases, borrowed from Scott Jurek’s book ‘Eat and Run’.
Posted by Jersey Strong Trail Runner at 7:57 PM 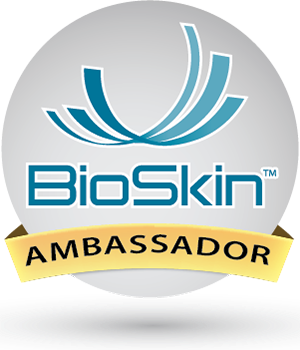